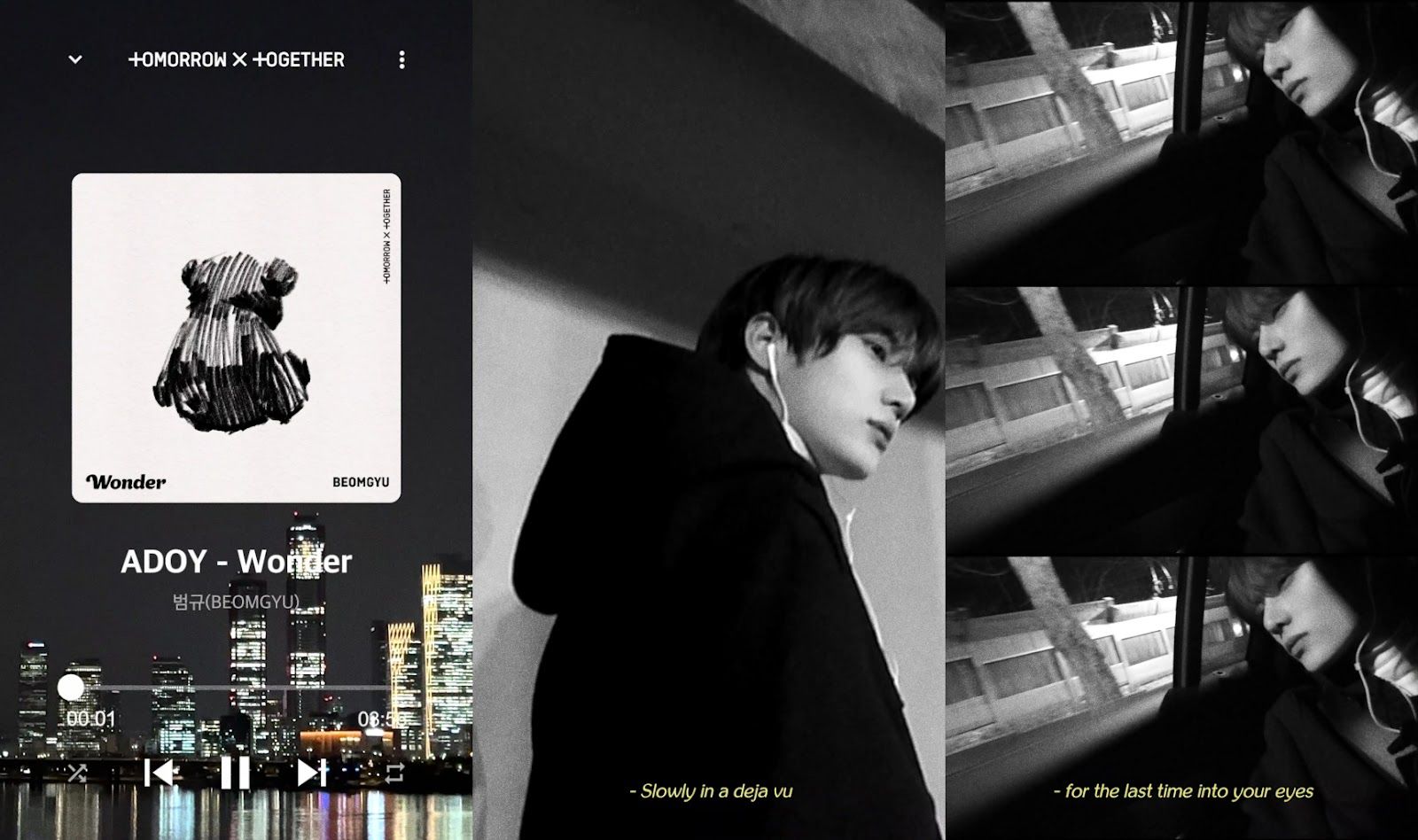 In the video, BEOMGYU presents his own interpretation of “Wonder” in an emotional style against a background of the night views of Seoul including the Han River. BEOMGYU’s tender voice harmonizes with the band’s sound, creating a dreamlike mood.

BEOMGYU commented, “I like ‘Wonder’ and the artist [ADOY] very much. The song is comforting and the lyrics are wonderful, so I really wanted to sing this song with my voice for MOA.”

TOMORROW X TOGETHER prove their musical versatility through their covers of  songs of various genres. Starting with “In My Blood” released to celebrate their first anniversary of debut, group cover songs include “thank u, next,” “F2020,” and “Sriracha.” Solo and unit covers include TAEHYUN’s “Over and Over Again,” YEONJUN’s “Song Cry,” HUENINGKAI’s “Youngblood” and “Sk8er Boi,” as well as YEONJUN and TAEHYUN’s “Stay.”.

TOMORROW X TOGETHER is set to hold a fan event titled “PLAY X TOGETHER”  through the metaverse platform ZEP on March 26.

About TOMORROW X TOGETHER

TOMORROW X TOGETHER is regarded as K-pop’s voice of Gen Z for their musical narratives which focus on the common experiences and emotions of youth across the globe. Consisting of five members — SOOBIN, YEONJUN, BEOMGYU, TAEHYUN, and HUENINGKAI — TOMORROW X TOGETHER took the K-pop industry by storm, racking up over 10 ‘Rookie of the Year’ awards and selling out their first U.S. showcase across 6 cities in 2019, the year of their debut. The band’s 2021 album, The Chaos Chapter: FREEZE, entered the Billboard 200 at No.5 and charted for a total of 13 weeks. The album’s lead single “0X1=LOVESONG (I Know I Love You) feat. Seori'” was selected No.1 by Billboard’s “25 Best K-Pop Songs of 2021: Critics’ Picks,” and their subsequent album The Chaos Chapter: FIGHT OR ESCAPE was featured on Rolling Stone’s “The 50 Best Albums of 2021” as the only album by a Korean act. TOMORROW X TOGETHER was nominated for “New Artist of 2021” on E! People's Choice Awards. They were also nominated for “Best Live Act” and became the first Korean act to win “Hero of the Year” at the BandLab NME Awards 2022.