The Most Awaited List of Critics’ Choice Awards 2022 For The Nominees Of Feature Films Is Here!

Motion Content Group of Group M, in Collaboration with Film Critics Guild and Vistas Media Capital is here with the 4th edition of Critics Choice Awards to honour the talent in web series, short films and feature films. 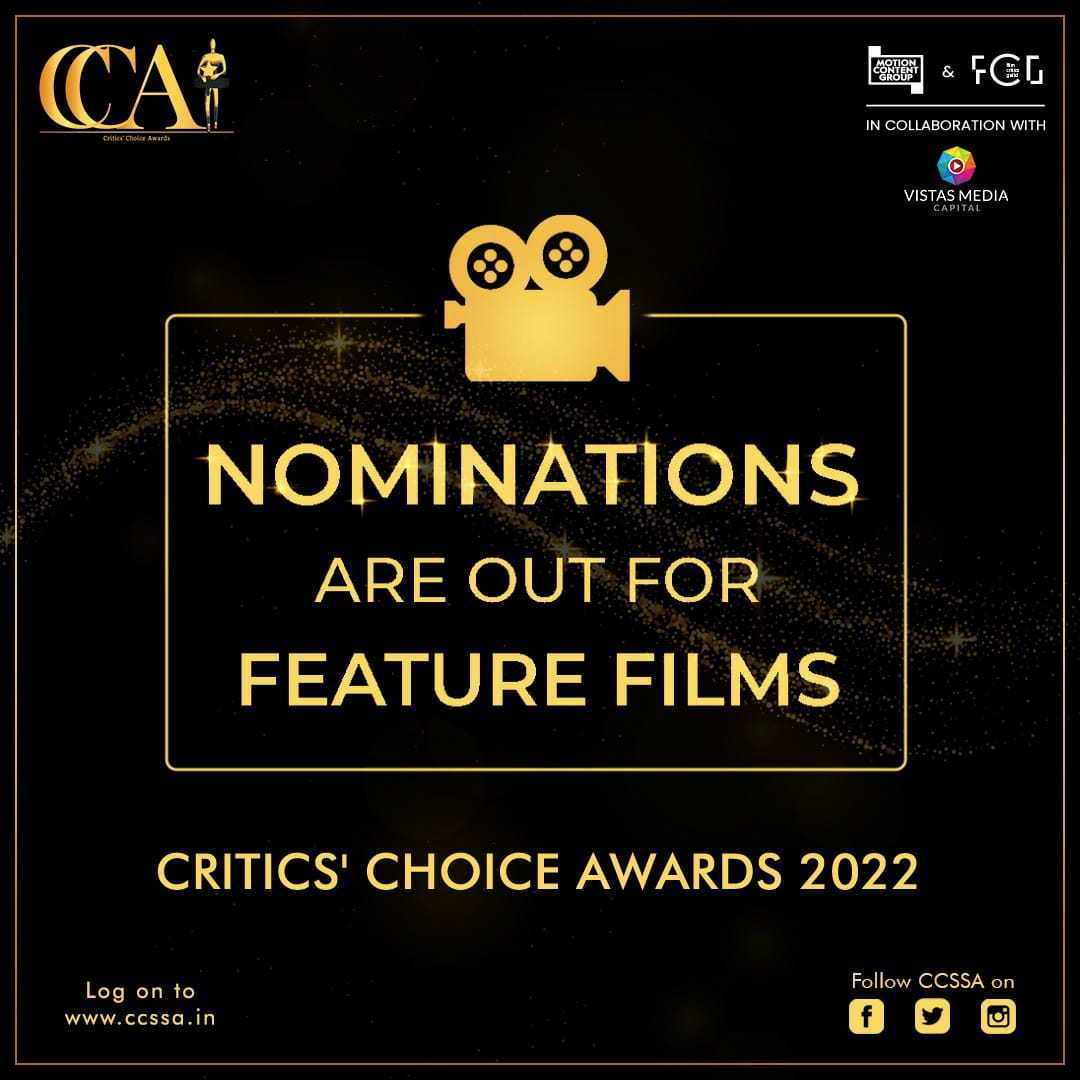 Critics’ Choice Awards is a platform that felicitates credible talent of the vast entertainment industry of the country. The upcoming award ceremony releases its most awaited list of nominees across feature films of all languages.

Motion Content Group, Film Critics Guild and Vistas Media Capital’s endeavor is to bring to the audience, a credible awards show that celebrates premium content across genres. The awards are curated by some of India's best critics ensuring to give the audience a credible Awards show.

Anupama Chopra, Chairperson Film Critics Guild said, “We are thrilled to announce the feature film nominees for the fourth edition of the Indian Critics’ Choice Awards.  Despite the challenges posed by the pandemic, the level of artistry and storytelling has not faltered. These awards are a celebration of that indomitable spirit of Indian cinema.”

Prasanth Kumar, CEO - GroupM South Asia said, “Despite the pandemic, 2021 witnessed incredible output with breakthrough performances. We at Critics’ Choice Awards believe that we truly are at the forefront in identifying and felicitating creators and their craft for the fabulous work put in. It is important to recognize talent and award them for their best efforts. We are delighted to present the nominations for the outstanding work done in 2021. We would like to thank filmmakers, directors, writers, and artists, who have worked extremely hard to give us compelling movies amid unprecedented competition.”

Abhayanand Singh - Group CEO and Co-Founder of Vistas Media Capital, “We take great pride that our entertainment industry has been working throughout the year and the outcome has given us colourful and varied cinema. We are happy to honour artists, technicians and filmmakers across all Indian languages this year.”

Here is the list of nominations of features under the following categories:

Adarsh Gourav for The White Tiger

Arun Dravid for The Disciple

Michal Sobocinski for The Disciple

P B Shreeyas Krishna for Rocky

The Film Critics Guild, India’s first registered association of film critics, is a geographically diverse cross-section of professionals who have come together to streamline the ethical and quality standards for film criticism in the country. With India’s most credible critics — representing print, radio, broadcast, and the web — at its helm, the Guild is dedicated to maintaining the highest level of integrity amongst its members and evaluating works of cinema that stand apart in their story telling.

Vistas Media Capital Capital is a media content and technology company, headquartered in Singapore, that operates and invests in ventures across the ecosystem of the global media and entertainment industry. The businesses and venture investments are diversified across Global Content Production and Distribution, Streaming Platforms across video and music, Animation & VFX Studio, Blockchain Technology and NFT (Non-Fungible Token), Gaming, Digital Media Marketing, Events and Award IPs.

Motion Content Group is a global content investment and rights management company that meets the market demand for new economic models for premium content across the entertainment and media marketplace. This is achieved by investing and partnering with the world’s leading talent, producers, and distributors to fund, develop, produce, and distribute premium content to help drive and support editorially and commercially vibrant, premium content networks and platforms for the global benefit of our content partners and advertisers. Motion Content Group India’s IP includes the YAARI Series, Critics Choice Awards, Hello Sago, and others.