Indian cinema's blockbuster producer Boney Kapoor to kick off shoot for his next Tamil film, his 3rd film with Super Star Ajith

Over the years, Boney Kapoor has come to be known as Indian entertainment industry's greatest showman. And we're not surprised!  The ace producer has broken language barriers and made films across languages in Bollywood and the South film industry. Now, he will begin shoot for the Ajith-starrer starting 9th March. 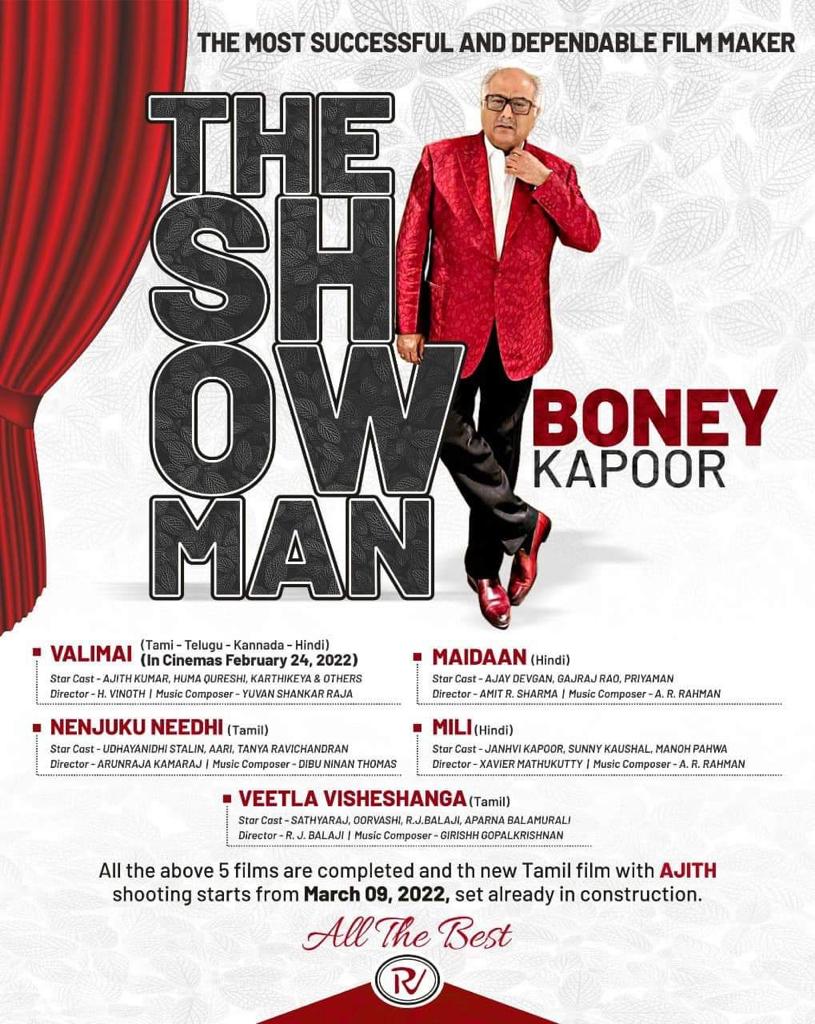 A source revealed, "After wrapping up five films in the thick of the pandemic, Boney Kapoor will begin shooting for the Tamil film with Ajith on 9th March. The set for the film is already being constructed. In typical Boney Kapoor style, this film is also going to be mounted on a massive scale!"

Recently, the Bollywood bigwig became the only producer to achieve the challenge of completing five films in the pandemic. Amongst Boney Kapoor’s films that commenced and wrapped shoot in the middle of the pandemic are the Ajith-starrer Valimai, Ajay Devgn-starrer Maidaan, Udhayanidhi Stalin-starrer Nenjuku Needhi, Veetla Visheshanga and Janhvi Kapoor starrer Mili. And now he is into his next! Truly unstoppable!

With smashing hits like Hum Paanch, Woh 7 Din Mr. India, Loafer , Judaai , Sirf Tum , Pukar , Hamara Dil Aapke Pas Hai ,No Entry, Wanted, the Telugu courtroom drama Vakeel Saab with Pavan Kalyan and Nerkonda Paarvai in Tamil with Ajith kumar . His 2nd film with Ajith ‘Valimai’ in Tamil releasing on 24th Feb is the most awaited film across india . Boney Kapoor has come to be known as a blockbuster producer.

Fans are now awaiting more details on the movies from the stable of India's biggest crossover filmmaker!