Urvashi Rautela, Bollywood's youngest superstar, has made her place in Bollywood and Hollywood through efforts and devotion. Urvashi is one of those individuals who has made India glad of her accomplishments and dedication. With her stunning appearance and exceptional charm, this worldwide actress has always captivated all of her admirers. 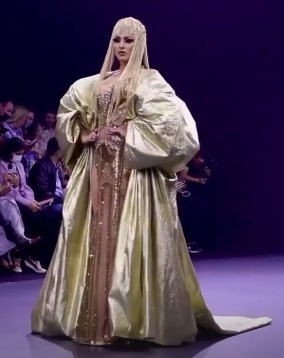 Urvashi Rautela has always demonstrated a strong affinity for high-end brands and royalty. She always makes us go bananas with her couture updos, but her exquisite look in a 40 crores gold ensemble has left us speechless. Recently, the diva spread her enchantment in UAE, when Urvashi Rautela became the first Indian to walk in the famous Arab Fashion Week twice. As we all know, Arab Fashion Week is one of the most important and prominent fashion weeks.

As she marched down the runway in her golden gown, the actress emanated charm and royalty. She was pictured wearing a high deep cut split golden embellished gown with golden strands dangling from the bottom hem. She finished off the appearance with a magnificent golden robe with balloon sleeves and a powdered touch. The robe had a wide trail that swept the floor, giving her the appearance of Cleopatra. The portion of her costume that drew the most attention was her headgear, which was made of real gold and fashioned by one of the most famous designers Furne One Amato, who has created looks for Beyonce and Jennifer Lopez, and many other renowned personalities. She was dressed in a pair of gleaming golden stilettos. Her makeup was flawless, with perfectly groomed brows, lashes, mascara-laden eyes, a nude brown lip color, and a contoured face.

Urvashi surely knows how to wow her fans and she always does it spectacularly. The Grammy winners Black-Eyed Peas applauded Urvashi for her stunning ramp walk. They even appreciate this international diva as their ultimate favorite Bollywood actress.

On the professional front, Urvashi Rautela was one of the youngest Miss Universe judges in history, as she was last seen judging the Miss Universe Pageant 2021. The actress also received praise for her international song Versace Baby, wherein she appeared with the Arab superstar Mohamed Ramadan. Urvashi Rautela will soon be featured in the Jio Studios film 'Inspector Avinash,' co-starring Randeep Hooda. The actress will star in the bilingual mystery "Black Rose," as well as the Hindi version of "Thiruttu Payale 2." Urvashi Rautela will make her Tamil debut opposite Saravana in the 200 crores big-budget film "The Legend." In addition, the actress has signed a three-film deal with Jio Studios and T-Series.