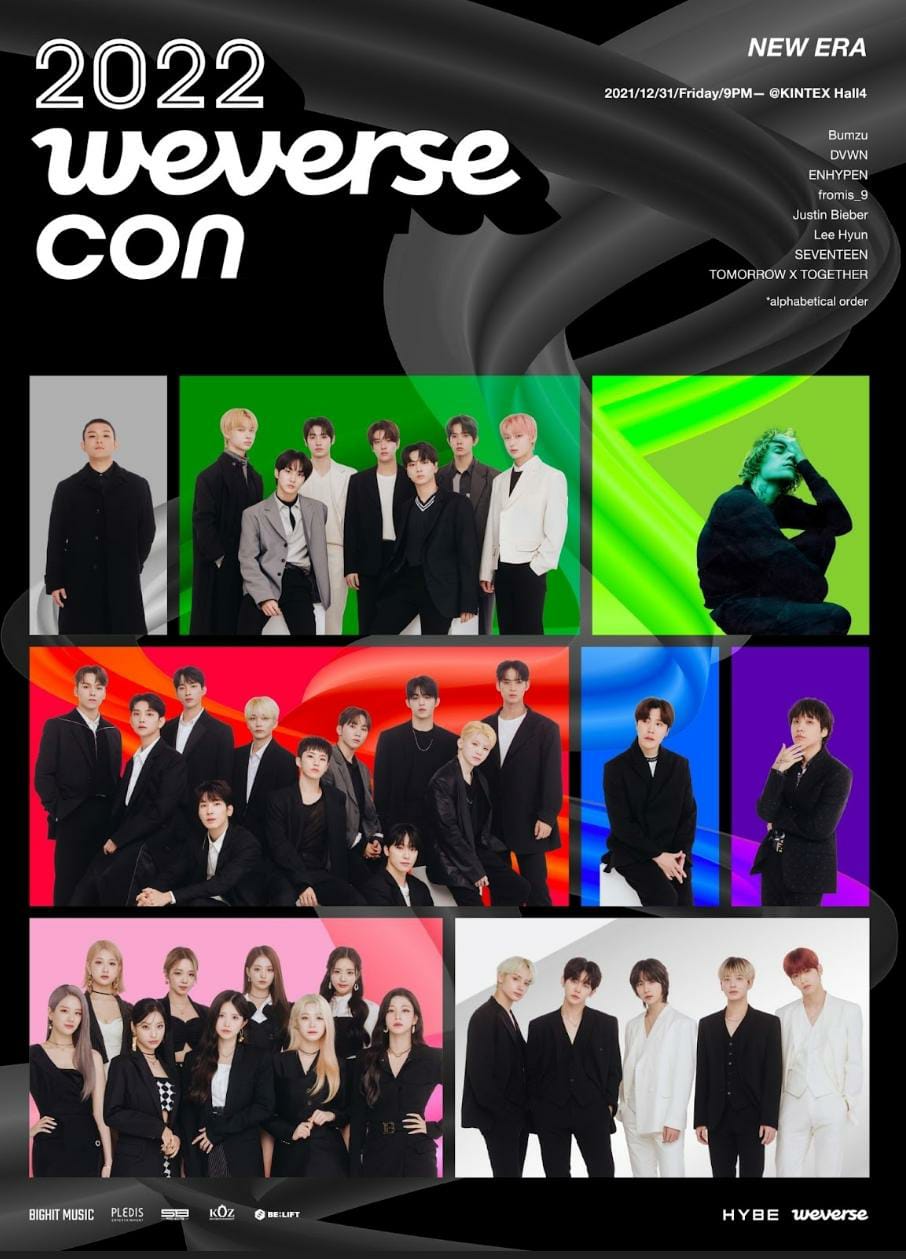 This year’s concert took on the theme of ‘New Era,’ a tribute to artists and fans who had endured difficult and unprecedented times and are now facing a new generation in which they can be together again. In 2022, artists and fans will create and welcome a new music paradigm together. ‘2022 Weverse Con' presented various attractions such as artist performances, meet and greets, special performances, and more.

ENHYPEN kicked off the concert with “Drunk-Dazed” and “FEVER” from BORDER : CARNIVAL. In their performance of “Blockbuster feat. YEONJUN of TOMORROW X TOGETHER,” YEONJUN made a surprise appearance. ENHYPEN wrapped up their performance with a powerful rendition of “Tamed-Dashed.”

Up next were fromis_9 and BUMZU. fromis_9 showcased bright performances of “Feel Good (SECRET CODE)” and “WE GO.” BUMZU opened his show with his new release “JUST” and continued with “Regret” and “28.5.”

The following sequence was a special tribute stage for Seo Taiji, a legendary Korean musician, songwriter and record producer, introduced through a speech by TAEHYUN of TOMORROW X TOGETHER, LEE SEOYEON of fromis_9, and HEESEUNG of ENHYPEN. Performances featured live band music from Seo Taiji’s live band. The tribute performance sequence was as follows: “Hayeoga” by ENHYPEN, “Internet war” by BUMZU,  “To You” by LEE HYUN, “Snow of Morning” by DVWN, “sogyeokdong” by fromis_9, “Come Back Home” by TOMORROW X TOGETHER, and “Last festival” by all the participating artists.

DVWN and LEE HYUN continued the concert. DVWN performed “fairy,” “Last,” and “Burn The Memory” with his unique vocal color and sensual mood. LEE HYUN performed “Moon in the Ocean” and a rock version of “I was able to eat,” then medleys of  “30 Minutes Ago,” “Will There Be a Next Time,” and “Without a Heart.”

Then, TOMORROW X TOGETHER opened their stage with “0X1=LOVESONG (I Know I Love You) feat. Seori,” the title track of The Chaos Chapter: FREEZE. After an eye-catching performance featuring props, the band continued with renditions of “Anti-Romantic,” “Frost,” a mashup of “No Rules” and “Magic,” and finally “LO$ER=LO♡ER.”

Justin Bieber’s performance took place over the screen but was no less vivid than any offline performance. The artist performed his mega hits “Somebody,” “Hold On,” “Love You Different,” “Peaches,” and “Anyone.”

The concert also addressed the artists’ thoughts on the “New Era.” On the “Let’s Live in the New Era” stage, ENHYPEN defined the “New Era” as “infinity” and said, “We want to embrace the infinite possibilities in music and in our group, ENHYPEN, and seek out an answer of our own.” TOMORROW X TOGETHER defined their “New Era” as “Rise Above” and said “we will make our best efforts to become artists who can be unafraid at the face of anything and overcome new challenges to grow both personally and artistically.” BUMZU commented: “new generations are made through the small but meaningful events in our daily lives.” fromis_9 said, “there’s a phrase: ‘that depends a good deal on where you want to get to.’ As a group, we do our best to make our dreams and imaginations come true.”

LEE HYUN declared: “My ‘New Era’ is this moment right now. I will return with new music that embodies the touching sentiments I have received from everyone.” DVWN said, “I will continue my efforts to become an artist whose music can give comfort and hope to listeners.” Finally, SEVENTEEN expressed their gratitude toward their fans: “A ‘New Era’ for SEVENTEEN is and always has been every moment we spend with our audiences. Power of Together. Being together is what makes SEVENTEEN.”

SEVENTEEN took the final stage of ‘2022 Weverse Con.’ The group launched their performance with their 2017 release “CLAP” and continued with special dance break and band versions of “HIT,” “Ready to love,” “To you,” “Together,” “Left & Right,” and finally “Rock with you” from Attacca.

After ‘2022 Weverse Con,’ the HYBE LABELS YouTube channel opened a new year’s countdown. With global fans, ‘2022 Weverse Con’ cheerfully greeted the start of 2022. ‘Weverse Con’ will return to fans every year with different themes as a venue for artists and fans to celebrate music and memories together.